Country: The Netherlands by Marlowe

A conversation with Jos Peerlings. 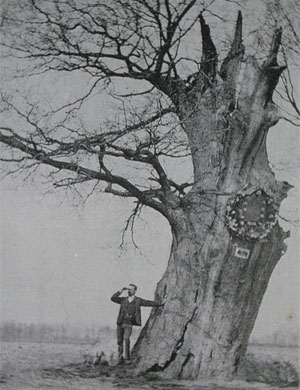 This tree was the last living witness to the Bokkenrijders. Legend is they gathered in the tree’s cavity, so large as to fit four at a table. This oak, dated 800 was just about the oldest tree in the country when it was torn in half by a storm in 1859.

On our recent trip to Weert (Netherlands), I was lucky enough to visit several interesting places, including the Prehistoric burial mounds of Weert, the Roman Catacombs and Gemeentegrot of Valkenburg and the Limburg Museum in Venlo.

This evening was like many we had spent at Lisette’s parent’s place. We sat around the back courtyard table, amidst the expertly kept flowers and plants of the garden. The comfortable lawn chairs along with the freely flowing Lentebok beer, courtesy of Jos, made for good yarn spinning with Lisette as my translator.

Jos got to talking about the fascinating languages and lore of Weert and then the whole province of Limburg in which it is situated. He then elaborated on the legend of Rowan Heze (who I had learned a bit about during my visit to the Limbug Museum), and the also dastardly Bokkenrijders (of whom I had not heard).

Paul, with whom I was visiting the Limburg museum, is a fan of the local band Rowwen Heze and explained to me that their name was borrowed from a legendary figure from the region. He couldn’t elaborate much more so I asked Jos that evening.

Turns out, Rowwen Heze lived in the early twentieth century and was a weird old man with a missing eye, a bald head, who stood about 175 cm tall and had seven children. More interestingly was his ability to consume raw flesh without harm and apparent immunity to pain. Jos said that Rowwen had pulled out his own infected eye when it endangered his life and that, although he never ever bathed, otherwise never fell ill.

Outside of the band, “Rowwen Heze” is an incredibly obscure reference beyond Limburg. On the internet you’ll be hard pressed to find anything about the man outside of the band. However, I did find this article , which gives a personal account of the man, summarized below.

Portrait of a legendary village figure 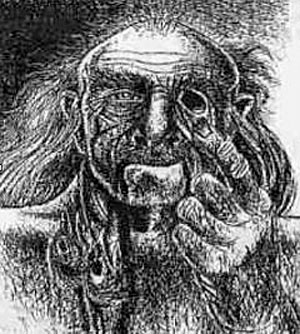 Frank and Hand Litjens and Grad Poels all lived in Horst with Christiaan Hesen (nicknamed in dialect “Rowwen Heze”, meaning Shaggy Hesen) and recounted their memories of the man in 1979.

During a construction project a stone fell on Christiaan’s eye. Refusing to go to the doctor, the eye eventually grew infected and rotted away, leaving a “nasty” hole in his head. Christiaan’s clothes were so tattered that his pants were held up with bare wire and so rotten that one “got an unobstructed view of his genitals”. Christiaan did a number of vile things, such as eating carrion, spitting chewing tobacco everywhere and occasionally harassing his neighbours.

Christiaan did a number of vile things, such as eating carrion, spitting chewing tabacco into his (exposed) crotch and occasionally harassing his neighbours. However, he was also know for his psychic and healing abilities.

However, he was also know for his psychic and healing abilities. Christiaan would often heal community members by stopping bleeding, fixing sprained limbs and even healing animals. During childbirth, Christiaan would sometimes be invited over to ward off evil spirits and ghost since he “was not afraid of anything”. One man, who had badly cut his hand in a threshing machine, claimed it stopped bleeding as he passed Christiaan’s house.

Christiaan assumedly carried on in his way until he died in 1947 at the age of 93. Poels noted that Hesen was [paraphrased]…

“Someone often denounced for his dismal appearance and quirky lifestyle but on whom people often sought help from when they were in a hard way. He was immune to everything bad and lived almost a hundred years”.

The Bokkenrijders, the “Goat Riders” 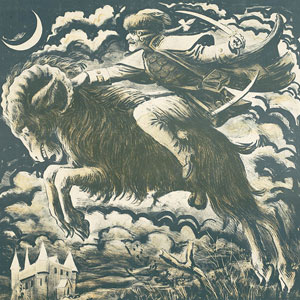 Detail of poster for the play The Bokkenrijder, directed by Louis De Vries in 1919.

The Bokkenrijders or “goat riders”, Jos explains, were a group of brigands from the 18 th century who rode on goats instead of horses. They robbed farms around Southern Limburg (a province of The Netherlands, though some parts are now regions of Belgium and Germany).

“People were much smaller then” he continued, making the mount feasible. When this still sounded dubious, he doubled down by stating that the police at the time rode on pigs (no pun intended)!

Towards the end of the 18 th century, the Bokkenrijders had attained somewhat of a Robin Hood reputation, in spite of apparently stealing from the poor and keeping it for themselves. For the entire second half of the century, the raiders and police rode around on their respective mounts with apprehended Bokkenrijders being sentenced to death. As it were, Jos said many petty criminals got sucked into the Goat Rider paranoia and were wrongfully executed as well. 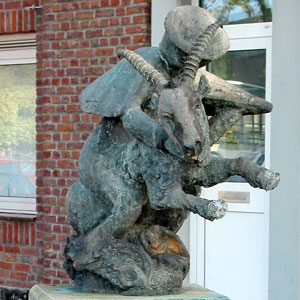 The one things Jos had intentionally left out was the religious aspect of the Bokkenrijder phenomenon. True, they were several bands of criminals who terrorized Jos and Leny’s region back in the day. But their ability to fly on goats was supposedly derived from their pact with Satan.

It seems these groups used this propaganda to strike fear into the hearts of the population. Unfortunately in a highly religious society, this also meant they risked witch-hunt style punishment. Ninety percent so accused were tortured and put to death by the authorities. It is now thought that even those using the Goat Rider moniker had no actual occult ties. And nobody rode pigs.