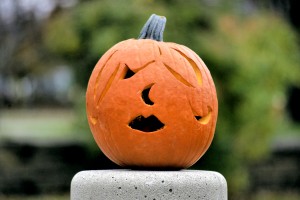 My family didn’t celebrate Halloween when I was younger. That was a strange North American tradition I only knew of from Hollywood movies. And thought it was strange… kids dressing up and shouting “trick or treat” to the people living in the houses on their block.

And those horrible carved orange pumpkins at the door. What was up with that, I wondered.

Yet, I never thought it strange that in the Netherlands kids (certainly in the south) carved a lamp out of (ugly) sugar beets in November. When done we’d proudly pair up and go knock on the houses in our neighbourhood. We’d sing a short, silly song in our dialect and were rewarded at every door with some candy.

This was our celebration of St. Martin’s Day, November 11, officially marking the end of the harvest season and the start of the natural winter. Originally built upon the famous Saint Martin, a humble man who was a Roman soldier and baptized as an adult and became a gentle monk.

The two events sure must have been inspired by the same events or thoughts. So, I took a look at the history of both events. (“Google it”, is what I whispered to myself.)

October 31 st is All Hallows’ eve, the evening before All Saints Day, and is not only celebrated in North America, but also in the UK and in Ireland I learned. The Celtic calendar starts on November 1 st – in other words New Years Eve! To ease people into the Gregorian calendar, the Roman-Catholic Church turned this into All Saints Day in the 9 th century. Many Irish immigrants brought the festival to the United States in the 19 th century.

In the Netherlands, Saint Martins Day (“Sint Maarten”) is celebrated on November 11 th and instead of using sugar beets, kids use pretty paper lanterns nowadays. The beets however were part of the old tradition thanking for Light, Warmth, Crops and Harvest with an enormous bonfire.

It surprised me to learn that in latter years even in Amsterdam children seem to take part in this festival! This has been connected to the many migrants Amsterdam gets from and gives to surrounding agrarian areas.

Here is a St. Martin’s song I found on the Internet. My dialect is a bit different and I recollect singing only these couple of lines: